In December, an exhibit opened at the Royal Ontario Museum in Toronto, focused on the work on designer Christian Dior, and particularly his role in resurrecting couture fashion after the Second World War. I’m not a huge follower of fashion, as anyone who knows me would assert, but I am fascinated by the links between popular culture and history, and this fits perfectly in there. My family is lucky enough to have an out-of-town membership for the ROM (worth getting if you visit Toronto a couple times a year), and I was able to register for a member experience involving the ROM exhibit.

A teaser to begin. Heading to a workshop (with hands-on textiles) and tour of the #Dior exhibit at @romtoronto #selffundedleave

Dawna Pym, who is part of the education staff at the ROM, and who has a personal deep and abiding passion for fashion, gave us a hands-on provocation with textiles from her own collection, helping us situate Dior historically. White-gloved, we lifted lace, examined the construction of corsets, and envied zippers on girdles. 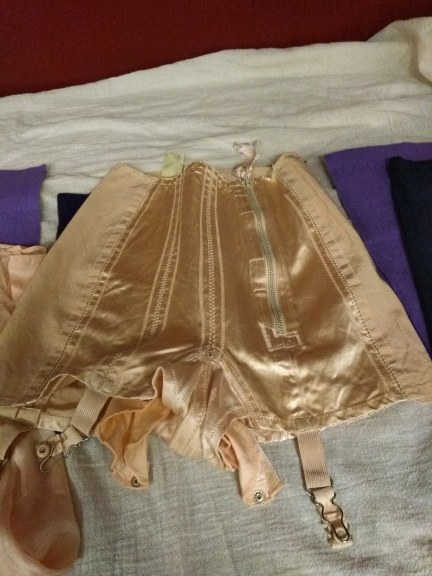 Yes, really – that’s a zipper on a girdle. How great would that be?

Dawna then took us for a guided tour of the beautifully curated Dior exhibit. The ROM has the 3rd biggest museum textile collection in the the world, behind only the Met and the Victoria and Albert, some 55,000 items. We got to see scrapbooks, fabric samples, finished products, and learn about the way in which the resurrection of couture also helped save the disappearing arts of hand beading, embroidery and more. Anyone who doesn’t think sewing machines have a spot in the makerspace needs to come and see some of the astounding work on display in this exhibit. More on this adventure in another post.

After 2 engrossing hours, I headed down to the cafeteria in the bowels of the ROM to reflect, and really try and absorb some of the amazing stuff I’d learned, and then the world tilted.

Because on her way out of the cafeteria, on her way to her session with Dawna, was a friend I spent a magic summer with 33 years ago – and who I’ve really only seen a few times in the interim. But that summer, and that experience, was one of those that binds you to those you share it with. It connects you and despite communicating via Facebook, when you see each other 33 years later, you call each other’s names, and laugh, and hug each other, and do a 5 minute update, and get teenaged girls (who can never imagine that they will be this old someday) to take your picture , and then, if you’re me, you sit down, and get a little teary, because that bond is still there, and it’s magic.

So, I thought, why, after all this time, is that connection still there?

In July of 1984, when I was 17 years old, I was lucky enough to be chosen as one of about 30 Ontario kids to go on an immersion experience to Germany. There was a cost involved, and I know I paid some, and my parents somehow came up with the rest (which would not have been easy). We would be boarded with families, most of whom had a teenaged child, and would go to German classes in the morning, and then have the afternoons free for social and cultural activities. We soon realized this was code for eating much bratwurst and poppyseed cake, drinking much beer, lying in the sun at the town’s outdoor pool complex and dancing at the local disco, with the occasional castle and cathedral tour thrown in for good measure.

I had done a fair amount of travelling as a kid. The requisite long road trip out west, lots of camping adventures with my family, a year spent living in Florida the year I was in Grade 9, while my dad worked on his Master’s in Media Literacy (yup – on his #selffundedleave – I come by it honestly). But prior to this trip, in the summer of Grade 12, I had not really been away from my family for very long – maybe a week at a time at a summer camp. And suddenly, here I was, on another freaking continent, with money of my own to budget (my dad set me up a ledger), and really, no accountability to anybody except the charming grandparent-age couple who were housing me.

I think that was the key.  That “out here on my own” thing we were all experiencing together, with no opportunity for helicopter parenting – no cell phones, no e-mail, no Skype or FaceTime. I sent a couple of postcards, but my parents were very far away – literally and metaphorically. If somebody got a dear John letter from his girlfriend in Canada, and was trying to self-medicate himself to solve it, nobody but us was going to dig him out of that hole. If somebody truly fell in love, and didn’t know how they were going to say goodbye, we cried it out together. If someone was mixing pain meds, paprika chips and apple schnapps a little too liberally, it was up to us to solve that problem. If I wanted to have my hair cut down to an inch all over my head, there was nobody who was going to say “no, that’s a bad idea”, and lots of people to encourage me. We became each other’s family, and we took that responsibility seriously. We grew up a lot, that summer, and we helped each other do it. 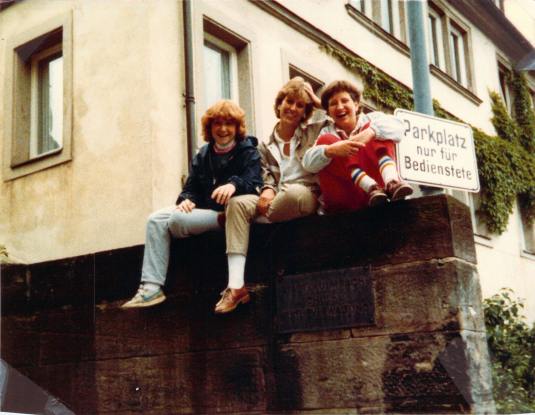 Dear heavens, but we’re young. Summer of 84, Kulmbach, Germany. That’s me, in the mushroom cut (before I cut it all off!). We were fierce, and brave and gorgeous!

And that’s why I had a little “verklempt” moment. Because seeing, and touching, and talking to my old friend reminded me of the fierce, brave, gorgeous women we were becoming in the summer of ‘84, and of all the things we didn’t know yet were going to hurt us and give us joy.

Being me, I am left with some questions.  What was that defining experience for you – when you knew that you weren’t in Kansas anymore, and that you were okay with that? Who were the people you shared it with? Are they still part of your world? Please share in the comments, or your own writing – I’d really love to know.

Second batch of questions: Do those opportunities still exist for our students and our children in this ultra-connected world? Do we encourage our students and kids to take them, and then get out of the way? How might the technology that enriches our lives be getting in the way of this kind of adventure? How do we help our parent/teacher selves let go?